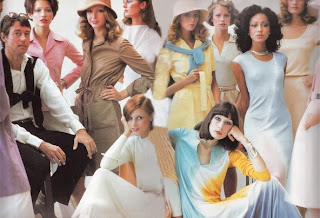 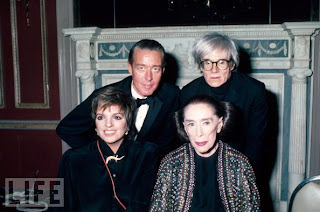 Well it seems that after all of the talk by many about doing a documentary or film on Halston, someone has finally followed though!!  A documentary entitled "Ultrasuede: in Search of Halston", was shown at the Tribeca Film Festival in NYC.  Celebrities, friends and models like Liza and Pat Cleveland all were filmed giving insight into his accomplishments in fashion and personal life.   I'm hoping and praying that the film will be put on a dvd so that his legions of devoted friends will have access to it!!  I know I'll be on the lookout for it!

I also discovered at the You Tube website that there are 34 video clips on various subjects and celebrities from film footage and interviews the late Andy Warhol did with various famous people.  Much to my absolute delight, there were four clips on Halston!  Anyone who is a fan must see them!!  He appears discussing his business and fashion philosophy and there are scenes from his couture and ready to wear collections.   To see Pat Cleveland working that Olympic Tower runway will firmly establish in anyone's mind why she has been called the "greatest runway model in fashion history"!
I was sliding out of my seat as I watched Ms. Cleveland and the other Halstonettes define what is real modeling....drama and elegance combined!!  They swirled and worked the skirts of those totally fabulous bias cut gowns....many of them made from a single piece of fabric!!  To this day there is no other American designer making clothes of that calibre and innovation!  One can easily see why he has been called the "ultimate American designer", and why sadly there will never be another like him!


Here is the link to that You Tube page:
http://www.youtube.com/profile?user=EastSeventhStreet#g/u

Posted by scorpioninblue at 9:20 AM

I'M NOW FULFILL FINANCIALLY BECAUSE OF THE LOAN I GOT FROM LFDS .I would like to bring this to the notice of the public about how i came in contact with LFDS after i lost my job and being denied loan by my bank and other financial institution due to my credit score. I could not pay my children's fees. I was behind on bills, about to be thrown out of the house due to my inability to pay my rent, It was during this period my kids were taken from me by foster care. Then i set out to seek for funds online where i lost $3,670 that i borrowed from friends which i was rip off by two online loan companies. Until i read about:Le_Meridian Funding Service  (lfdsloans@outlook.com / lfdsloans@lemeridianfds.com) somewhere on the internet, Still wasn't convince because of what i have been through until a relative of mine who is a clergy also told me about the ongoing loan scheme of LFDS at a very low interest rate of 1.9%% and lovely repayment terms without penalty for default of payment. I have no choice than to also contact them which i did through text +1-989-394-3740 and Mr Benjamin responded back to me That day was the I'M best and greatest day of my life which can never be forgotten when i receive a credit alert of $400,000.00 Usd loan amount i applied for. I utilized the loan effectively to pay up my debts and to start up a business and today i and my kids are so happy and fulfill. You can as well contact them through email: (lfdsloans@outlook.com / lfdsloans@lemeridianfds.com)  WhatsApptext  helpline: +1-989-394-3740 Why am i doing this? I am doing this to save as many that are in need of a loan not to be victim of scams on the internet. Thanks and God bless you all, I'm Oleksander Artem from Horizon Park BC , Ukrain.

scorpioninblue
Hartford, Connecticut, United States
I'm a part-time designer of men's clothing (at the moment)in the fair city of Hartford, CT., and a devoted fan of HALSTON!